Program to help find others who play at the same hours? (Non-USA RPers, unite...)

ULBlue13 Member UncommonPosts: 28
June 2018 in Role Playing Discussion
(I'm posting this in "Roleplaying" because being able to team up with particular players regularly is more important with role-playing, so I guessed that this forum might have a particularly high concentration of people who find this problem really annoying and would like a possible fix for it!)
I have an idea for a simple program that I think could be very handy for off-peak roleplayers.  I'd like to find out whether it's worthwhile trying to make this happen, are other people interested?  And, if so, what features would you like to see in it?  If there is interest, then I could see about trying to get it made.  (I say "get it made" because I'd have to find someone to help me with the programming, as there are things involved that would be beyond my very rusty programming skills.)

My idea is to have a program that you could use to record what hours you actually do play a game: for instance, you could set it up to log when you were logged into, say, a particular game or chat channel (for IRC-based roleplaying channels), and it would generate a small graph of what times of day you were most often logged in, which you could then use in a forum signature or anywhere like that.  Then people looking at someone's graph could see at a glance whose hours were more compatible with theirs.

I don't know whether this would be better as an add-on for a particular game or chat client, or a free-standing program which you would leave running continually in the background and would do it.  If it was integrated with a game, there would be a possibility (only if the player enabled it, of course) of arranging it to send the data to the game's website so it would be searchable by others - a player could search for a specified time, or put in their own graph, and the site would list participating players whose hours matched that most closely.
(Sketches of initial ideas:) 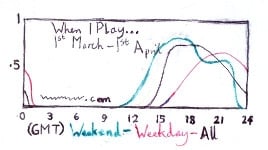 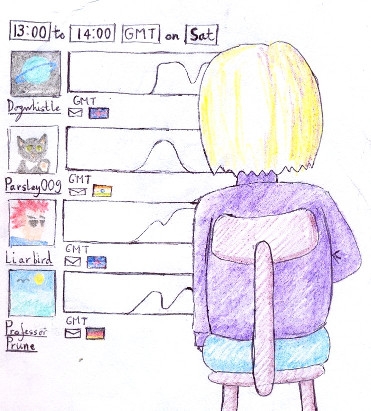 Would you use it?
What features would you like to see?
All feedback welcome.
If you write, be polite.